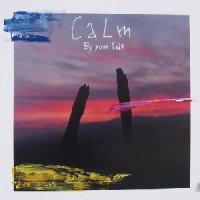 We humans weren't made for modernity; the rush of the rat race, the disconnect of social media, the prison industrial complex, spice zombies and Brexit. It's pretty confusing stuff right? Now I ain't no fancy pants medical doctor (like Drs Dre, Oetker and Rob) but I'd advise you take a little time to unwind your mind with the wonderful sounds of Calm.

For the uninitiated, Calm is the stage name of Japan's Fukagawa Kiyotaka, a legendary producer, musician and selector who's spent the last twenty years packing yearning, heart swelling emotion into his deep house, ambient and downtempo creations. His previous album, 2015's "From My Window" resonated deeply with Hell Yeah boss Marco, who reached out and found a kindred spirit. Over the course of a couple of days playing records, relaxing and enjoying each other's company, a friendship was born and the seeds were sown for a brand new album on Marco's mighty Hell Yeah.

Two years later and the sublime "By Your Side" is here. A ten track journey through drifting rhythms, dreamy melodies and sumptuous chords which has already cast a spell over the likes of Balearic titans Moonboots, Phil Mison and Chris Coco.

Pek within Andrea Amaducci's special artwork and find the delights within. Majestic opener 'Space Is My Place' transports you straight to a blue sky paradise with rippling chords reflecting the warm sun and is ripe to become a modern classic.
From there Calm's masterful synths keep you flat on your back and gazing up to the heavens as gently drums roll beneath the brilliant 'Afterglow and First Star' and then 'Ending of Summer, Beginning of Autumn' is a little more reflective as it rues the end of warmer days.
‘Sky, Colour, Passing' is floating celestial bliss with angelic harmonies, 'Shadows and Lights' is a lazy Sunday soundtrack with delicate piano keys and the gentle chug of 'Before Landing' glows with cosmic light and warms you with astral disco grooves that will be the jewel in any open air DJ set.
After the sensuous moments of 'Mellow Mellow Sadness' encourage you to reach out and hug someone close, 'Shade of Tree' washes over you like a seaside breeze before the final two tracks layer up synth modulations and quietly epic guitars into rousing pieces of slow motion euphoria.

A1 Space Is My Place
A2 Afterglow And First Star
B1 Ending Of Summer, Beginning Of Autumn
B2 Sky, Color, Passing
B3 Shadows And Lights
C1 Before Landing
C2 Mellow Mellow Sadness
C3 Shade Of Tree
D1 My Home Town
D2 You Can See The Sunrise Again