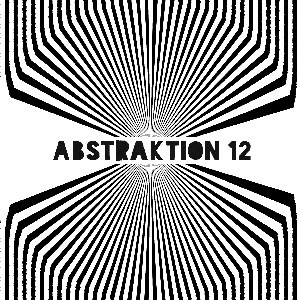 Recorded live at Rockfield Studios over two days by an accomplished and unique band consisting of two drummers and two guitars and vocal, it has a sound heavily steeped in rock, minimalism and psychedelia, but even with these references, we can't think of a record out there that sounds anything like this one. In this day and age, that's a pretty hard thing to do. "I'm a punk, always have been, but only in the same sense that La Monte Young was or Jason Pierce is. You don't have to thrash out bar chords on a Les Paul to be a punk. Abstraktion 12 is the most punk record I've ever made since KluBmiX!33, but it sounds nothing like it.

This record was abstract and unique in it's conception, it was a coming together of not just a band but also of the people who have followed the band and who joined us in the studio for the recording of the album. Having two drummers created the perfect foundation for the songs as they both play the same beats but the slight inflections and movement between them creates a constant pulsing rhythmical shift. For me it was important to be doing this album with Chris Davis, the original drummer from six by seven and someone I had grown up with in music. Without explanation he understood what was needed to make this record work. Added to this we had the technical skills of second drummer Charlie and Chris Moore on the Fender VI. Chris added a unique sound to the music and plays like no other bass / guitar player, offering only minimal tight bass lines with an occasional extra note played into the perfect pocket, just to remind you that he is there." CHRIS OLLEY