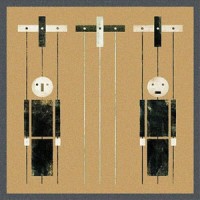 The second of Polytechnic Youth’s ace new LPs for July, sees a mighty set from Austria based synth pop duo Mitra Mitra. Following previous releases on Peripheral Minimal and their own Micromort label, not to mention a lathe cut right here on PY that sold out in 20 minutes in Dec. 2015.

The band was formed in Vienna in late 2014 by Violet Candide and Mahk Rumbae. Originally from New Zealand, Violet Candide is a founding member of the Crazy Hospital DJ collective, and one of the organisers of the legendary “Future Echo” club night in Vienna, and is one half of ‘Anesthetic Hairpins’; whilst British musician Mahk Rumbae is known for his work as a member of the industrial/experimental project ‘Konstruktivists’, ‘Oppenheimer MkII’ (with Andy Oppenheimer of Oppenheimer Analysis) and his solo techno project ‘Codex Empire’.

After working together on one of Violet's solo songs, “Heat”, the pair decided to continue working together and formed Mitra Mitra as a more full time project, with the aim of writing electronic songs not tied to any particular influence or style. However, if there was such a thing as a signature PY sound- arguably this LP (alongside last year’s Vorderhaus full length), encapsulates it most. Beautifully icy cold synth pop straight outta’ early prime era Mute / Blackwing studios output. Serene yet melodic, edgy, dry icy hooks and delicious grooves aplenty all over this record. Eight wonderful tracks where quality and sheer melodic guile of the song writing never dips and attention truly is held across the whole set, ….no mean feat indeed.