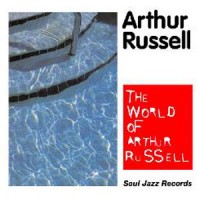 This new edition of Soul Jazz Records’ ‘The World Of Arthur Russell’, the seminal collection of Arthur Russell’s essential music, is released on heavy deluxe triple vinyl and deluxe tip-on Japanese style CD edition.
This album brings together some of Russell’s best-loved and most accessible works including his wide-ranging music, both solo and in groups, including Dinosaur L (the essential ‘Go Bang’), Loose Joints (the equally classic ‘Is It All Over My Face’) as well as rarities such as the 7” only ‘Pop Your Funk’, Indian Ocean’s ‘Schoolbell / Treehouse’, Lola’s ‘Wax The Van’ and more.

Arthur Russell’s music effortlessly crossed musical boundaries making it timeless. His dance music credentials are faultless and this collection features mixes from Larry Levan, Françcois Kevorkian and Walter Gibbons. Similarly, his songwriting, musicality and performance skills are equally cherished, as composer Philip Glass wrote, “this was a guy who could sit down with a cello and sing with it in a way that no one on earth has ever done before or will do again.”