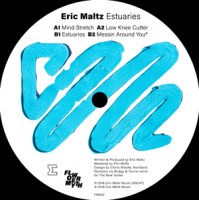 Eric Maltz kicks off his Flower Myth label earlier in the year with "Pathway". Warmly received by me and WHP / Love International star DJ, Krysko, it showed a unique flair and sonic prowess from this producer who owes much of his break to New Jersey's Levon Vincent who mentored him during his early years.

Definitely inspired by techno's cutting edge production, the easiest comparisons I can make are with DJ Qu and friend / luminary, Levon Vincent. These are tracks for late into the session, blackened with thick textures and unrelenting rhythms yet dynamic and undulating like all good house music structures.

Matt says: I've got a feeling me and the aforementioned Krysko will be bagging this pronto and moving it swiftly to the front of our bag yet again. We suggest you do the same!

A1. Mind Stretch
A2. Low Knee Cutter
B1. Estuaries
B2. Messin Around You