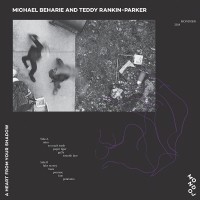 "A Heart From Your Shadow" is the debut collaborative LP from Michael Beharie (New York) and Teddy Rankin-Parker (Chicago). Since graduating together from Oberlin College, Beharie and Rankin-Parker each veered into markedly different avenues. Beharie joined up with the ever-confounding New York ensemble Zs (Northern Spy, The Social Registry). Rankin-Parker became an on-demand cellist for his prowess in the work of improvisation and avant-garde music, lending his talents to a wide array of collaborators such as Primus, Iron & Wine, Steve Reich, and Pauline Oliveros. Rather than jump into stream-of-concious improvisation, Beharie and Rankin-Parker chose to focus the album's themes via intricately composed pieces. "A Heart From Your Shadow" could be described as protest music, brimming with intense energy, harrowing anxiety, and steadfast optimism. Produced by Michael Beharie, mixed carefully by Jim O'Rourke, mastered by James Plotkin and cut to LP at D&M Berlin.