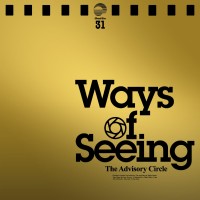 Following on from last years' 'Autres Directions' under his own name, and a collaboration with Jim Jupp of Belbury Poly with the celeb matchup of the year in 'The Belbury Circle', Jon Brooks has returned to his Advisory Circle moniker for 'Ways Of Seeing'.

After a brief introduction (like we wouldn't know exactly who were listening to within ten seconds of kick-off), we get slowly arpeggiated saw waves and delayed blipping sinewaves dreamily meandering over the insistent percussive backdrop. Massive snare drums and swelling FM sweeps bulk out the forward-moving Italo throb.

'The April Interval' and it's later counterpart, the stunning 'Skyways' are beautifully redolent of the 80's library music Brooks (and the rest of us) clearly have a soft-spot for, they are stunning, saturated, key led melodic journeys, brimming with spine-tingling whimsy, perfectly measured production and that impeccable ear for progressions we've come to expect.

We get spoken-word musings in 'A Mechanical Eye', (though I have less in common with this man than the monologist from the last album, he also being a solid tea enthusiast), before the kosmische shifting arps and swirling pads of 'Airborne Seeds'.

A mindblowing tour-de-force once again from The Advisory Circle, and one that will be on my record player for some time to come. Stunningly immersive, beautifully produced and stunningly packaged. Album of the year material, for sure.