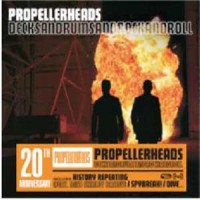 20 years ago Propellerheads released "Decksandrumsandrockandroll" - the only ever album from the band! Stuffed with hit singles "Spybreak!" "Bang On!", "Take California" and the extraordinary "History Repeating" timeless featuring the only true James Bond songstress - Shirley Bassey.

As said at the time, "Decksanddrumsandrockandroll" is something very special. Funky music and a little crazy, it’s music for good and bad times, for those dirty moments when drugs are no longer effective but the party refuses to stop. An effective groove filled with hints of humour and a little kitsch. It sat beautifully next to fellow breakbeaters Fatboy Slim, Midfield General, Jacques Lu Cont and Mint Royal.  20 years later Propellerheads are now back with this reissue. The charm has remained intact and it stands the rest of time. A living room classic, brought to life once again!