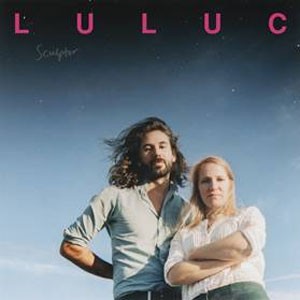 "We spray our hair into submission, upright to attention. Marching to no orders, imagination has no borders. Well lucky that."

“Me and Jasper,” from Luluc’s third album Sculptor, is a confident challenge to small-town insularity, lilting yet vigilant, and championed by a defiant guitar solo from the band’s friend J Mascis. It’s a reflection on a common pitfall of adolescence: limitless possibility battling constant obstruction. “My own experiences as a teen were often fraught” says songwriter and vocalist Zoe Randell. “The small town I grew up in provided a great study in gossip, scandal, character assassination, and the willingness of people to go along with it.” It’s a song about fighting for agency on an album that is in many ways about volition, potential, and how people can navigate difficulties and opportunities to create different paths.

Sculptor can be consumed loud, because while Luluc's music is at times masterful in it’s minimalism, it is anything but quiet in impact. There’s a turning point people experience when hearing Luluc. Janet Weiss of Sleater-Kinney says “it’s music that, once you hear it, you can’t live without it.” The National’s Matt Berninger said that for months, Passerby was “the only album I wanted to listen to.” “What first hits is that voice,” writes Peter Blackstock (No Depression), “a peaceful serenity that reaches deep into the heart.” When NPR’s Bob Boilen named 2014’s Passerby his album of the year, he wrote: “I've listened to this record by Australia's Luluc more than any other this year. These songs feel like they've always been.” Legendary producer Joe Boyd, who discovered Nick Drake, told BBC radio he exclaimed “Who the hell is this?!” when he first heard Luluc’s debut, Dear Hamlyn.

That gripping quality pulses through Sculptor. Randell writes with more experimentation and possibility. “Broadly speaking, with these new songs I was interested in the difficulties that life can throw at us - what we can do with them, how they can shape us, and what say we have,” she explains. Sonically, the band have broadened their palette. Multi-instrumentalist, singer, and producer Steve Hassett mastered a spectrum of instruments to fully realize the album’s expansive and daring vision. Randell and Hassett did nearly all of the writing, recording, and producing themselves, but their vision is far from insular. In addition to Mascis, Sculptor features contributions from Aaron Dessner (The National, and producer of Passerby), Jim White of Dirty Three, Matt Eccles, and Dave Nelson. Recording took place in Luluc’s new Brooklyn studio, which they built themselves.

That everyone has control of their own story is at the core of Sculptor. For Hassett, it’s illuminated by the last line of the album: “The most beautiful, serene sculpture my hands could make, could trace, could break.” “All of the songs are playing with those ideas,” he says. “Life is something you get, and you can get sidetracked for years and even destroy it, or you can remember that you've got some control over your life.” But listeners of Sculptor may yield some of that control, even if for a short time, to the mastery of the music itself.