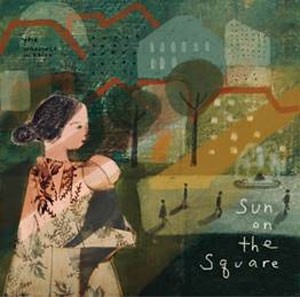 For listeners of the innocence mission, the Lancaster, Pennsylvania trio are beyond a favorite band, more like a beloved companion, such is their intensity and fragility of their sound and vision, spearheaded by Karen Peris’ heartbreaking, breathtaking voice. Those fans include Sufjan Stevens and Sam Beam (Iron & Wine), who have both covered innocence mission songs, and in whose company the trio deserve to be bracketed.

Now, with “Sun On The Square”, their first album in four years and first UK/European release in over a decade, the trio have joined the Bella Union family, following Karen’s guest appearance on “Ojalá” by Lost Horizons, the band collective co-created by label skipper Simon Raymonde.

“There’s less than a handful of artists on my Bella Union dream list,” he explains. “The Innocence Mission are on there but they’ve remained an elusive mystery, and believe me, I’ve tried! I’ve been a fan as long as I can remember. From the second I heard Karen’s voice, I’ve been smitten. Birds Of My Neighborhood is in my Top Three albums of all time. It’s a heartbreaker though. Guarantees tears. But the more the tears fall, the deeper I go!”

Barry says: Beautiful tender fingerpicked guitars, brittle ballads and more than a hint of that childlike Newsom vocal peeking through. Sun On The Square is a beautifully realised and enchantingly airy work, an essential for any folk fans.

The Innocence MissionSee You Tomorrow