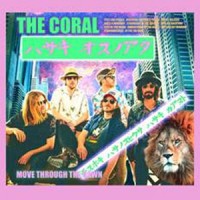 ‘Move Through The Dawn’ was recorded at Parr Street Studios in Liverpool and produced by The Coral and Rich Turvey. The album is the influential Hoylake five-piece’s follow-up to 2016’s critically acclaimed ‘Distance Inbetween’, which featured the BBC 6Music playlisted singles ‘Miss Fortune’, Holy Revelation’ and ‘Million Eyes’.

Nick Power, The Coral’s keyboardist, has written a new book, ‘Into The Void’, which will be published by Ebacc concurrently with the new album. Powers’ third book, ‘Into The Void’ is an insightful, amusing and evocative first hand account of the recording, release and touring of ‘Distance Inbetween’, which came after a five-year hiatus for the band.

Since their debut EP release in 2001 The Coral have sold over a million UK albums, with five reaching the Top 10 including 2003’s chart-topping ‘Magic and Medicine’. Their eight Top 40 singles include ‘Dreaming Of You’, ‘In The Morning’, ‘Pass It On’, and ‘Don’t Think You’re The First’.

Andy says: Welcome to the West Coast, of The Wirral that is! Lovely mellow sounds and CSN style harmonies take you to a Pacific ocean blue, via The Mersey, of course! This mood suits The Coral as they've possibly turned in their most tuneful collection of songs so far.

1. Eyes Like Pearls
2. Reaching Out For A Friend
3. Sweet Release
4. She's A Runaway
5. Strangers In The Hollow
6. Love Or Solution
7. Eyes Of The Moon
8. Undercover Of The Night
9. Outside My Window
10. Stormbreaker
11. After The Fair