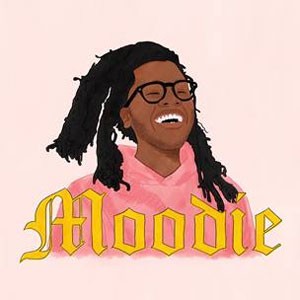 Yuno – aka 27-year-old Carlton Joseph Moodie – is in a New York state of mind. He was born there in the Bronx, but from the age of nine months spent his entire life in Florida, and particularly Jacksonville. He's dreamed of returning to New York to live ever since. New York is what inspires his creative streak, even though he's only visited the big city four times. “I plan to move here one day,” he says defiantly, from a cafe in New York. The exotic lure of bright lights, brighter city, is one of the most relatable of tales, and it certainly makes a lot of sense once you've wrapped your ears around Moodie – Yuno's first EP, released via Sub Pop. Moodie is such a New York record. It veers from Tame Impala psych-pop to wonky Vampire Weekend college rock via backpacker hip-hop and, well, Len's “Steal My Sunshine.” It's a collection of songs that chimes with pop's increasing lack of concern for genre. It's the opposite of tribal, as multi-cultural and diverse as a ride on the New York City subway, across all five boroughs. It can't be attributed to one particular origin of sound or vision.  Yuno writes all his music alone at home, self-producing and engineering, playing all the instruments. “I don't really go anywhere in Jacksonville,” he says, drowsily. “I don't drive. I spend a lot of time in my bedroom.” The six-song collection thus sounds like a collage of bedroom posters. “So Slow,” for instance, would be a Washed Out flyer sat next to a piece of Kid Cudi artwork, whereas “Why For” with its squealing Wavves guitars would probably be represented by a big weed sticker or some Sleigh Bells ticket stubs. It's deeply creative and visual.

Sub Pop found Yuno via Ish Butler of Shabazz Palaces, who A&Rs for the label. He stumbled on Yuno on Soundcloud and kept a keen eye on him. Like Ish, Yuno is encouraged by the genre-bending age we're in, citing Lil Uzi Vert and Young Thug as sources of influence. The EP's title clearly relates to his surname, but it's also channeling the emotional variety of the tracks. “It covers all the different feelings you have at the end of a relationship,” he notes. “Sometimes you're really happy to be moving on, other times you're really upset to see something go.”  New York, however, was the major muse. “Being here really changed things for me,” he says. “It feels like my pace here. All these things are in one place in New York. There's so much to experience.” Moodie is written from the perspective of being back in Jacksonville, missing the Big Apple. And while it plays out like longing, it's not all doom and gloom. Yuno's major hope is to make music that fills people with happiness. “That will make me happy,” he says, with a light laugh.