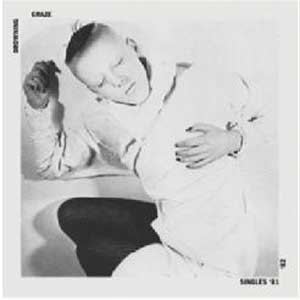 Both formats include a free cassette whilst stocks last.

The history of post punk is full of curious footnotes and sudden dead ends. Fascinating bands that flared up, intoxicated with the rush of ideas and sense of creative freedom in that fertile period where there were no rules and boundaries to creativity for groups, leaving a vapour trail of a handful of singles and inevitable John Peel sessions before disappearing back into the ether.

The Drowning Craze are typical of those bands. Their legacy is three singles and a John Peel session, a glimmer of possibility and a hint of something quite wonderful and then gone. Fortunately for them their constituent members re-emerged years later in other projects leaving them flagged up on the history train with the band’s bassist Simon Raymonde going on to play in the Cocteau Twins before setting up his own label, Bella Union and original vocalist, Angela Jaeger, joining Pigbag whilst their next singer, Frankie ‘Fun’ Nardiello, joined the esoteric Chicago industrial disco band Thrill Kill Kult.

The Drowning Craze had formed in early eighties London with Simon Raymonde - the son of Ivor Raymonde who wrote hits for Dusty Springfield, such as ‘I Only Want To Be With You’ and ‘Stay Awhile’ and then string arranging for all the Walker Brothers hits. Simon played piano and violin at school but took his own tangent when punk rock arrived and bought his first bass in 1977 aged 15 and learnt the whole of ‘Never Mind The Bollocks’, the Sex Pistols’ first album, in one afternoon.

Inspired by punk rock / post punk and John Peel he was very much a child of those times. Glued to Peel’s lugubrious tones on the radio that were signposting a way out of the crashed car of punk rock and into new musical soundscapes he would also help to carve as a foot soldier with The Drowning Craze.