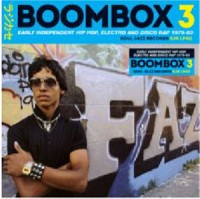 Soul Jazz Records’ new ‘Boombox 3’ continues their story of the first rap records to be put onto vinyl. It is a jam-packed collection of original independent old school hip hop, created with just one thing in mind - to get this party jumping.

After the explosion of hip hop in the parks and clubs of The Bronx in the mid-1970s, it was in Harlem where the first rap records emerged at the end of 1979 - an avalanche of superb rap tracks released on small independent labels all trying to capitalize on the success of ‘Rapper’s Delight’.

Like hip hop culture itself, these first rap singles are the product of their own unique set of aesthetics - exciting and innovative rap performed with Bronx block party B-Boy funk breaks, disco jams and Jamaican sound system culture.

The extensive sleevenotes discuss hip hop’s trajectory from the first wave of Bronx creativity - the legendary DJs Kool Herc, Grandmaster Flash and Afrika Bambaataa - through to its arrival in Harlem via the entrepreneurism of old-school African-American rhythm and blues producers and émigré Jamaican producers all living in New York. Along the way the notes discuss everything from the New York power blackout of 1977, the Italian mafia involvement in the music industry, the links between rap and Jamaican dancehall and more besides.

‘Boombox 3’ features a line-up of stunning, near unknown New York rap artists, classic disco breaks (including Chic’s omnipotent ‘Good Times’, MFSB’s ‘Love Is The Message’, Queen’s ‘Another One Bites The Dust’), proto-electro and more. And by the early 1980s the first rap records outside New York began to emerge - Los Angeles, Houston, Milwaukee, Phoenix - and the first of these are also featured here in this new collection.