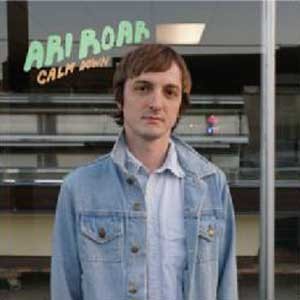 With intuitive powers of clarity and concision to the fore, ‘Calm Down’ is an album that draws on 1960s pop and modern DIY heroes for a set of lovingly languid, lo-fi miniatures. Depths of detail and lived experience bustle beneath effortlessly melodic surfaces - sure signs of a writer in confident command of his pitch.

With a tight run time of 28 minutes and few of its 15 songs breaching the two-minute mark, ‘Calm Down’ is not an album that overstates its case. ‘Called In’ merges the influences of garage pop and Grandaddy in its plaintive plea to “stay alert,” while the brightly summery ‘Windowsill’ and literal shaggy-dog tale ‘Lost And Found’ show an easy lightness of narrative touch and mood control.

Elsewhere, Ari makes weightless work of variously playful, psychedelic material, navigating his songs with expressive ease even when he’s documenting difficulties navigating high school hallways on ‘Don’t Have A Fit’. ‘Off And On’ is luminous, ‘Implode’ sweetly chugging. ‘Sock Drawer’ recounts an inner voyage with a gently psychedelic touch before the playful strut of ‘Choke’ and buoyant release of ‘Lucky One’ offer precision-judged notes of climactic uplift.

For Ari, ‘Calm Down’ is a milestone in a journey that began in Dallas, Texas, where he started songwriting on his family’s “super-old, outof- tune piano” as a child. Early inspirations included Grandaddy’s ‘Under The Western Freeway’ and Radiohead’s ‘OK Computer’; his first concert experience was The Doobie Brothers, with his parents. But it was a gorgeous solo performance by Jason Schwartzman in the teen comedy ‘Slackers’ that inspired Ari to start writing songs with lyrics at 14: “I remember being mesmerized by it… and I went into my room and started trying to write something similar. After that I just never stopped.”