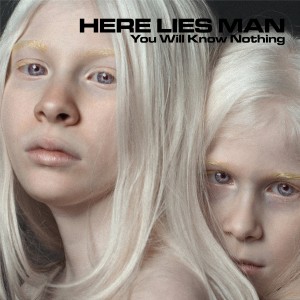 Here Lies Man took the music world by storm in 2017 with their self-titled debut positing the intriguing hypothesis: What if Black Sabbath played Afrobeat?

'We’re very conscious of how the rhythms service the riffs,' explains founder and vocalist / guitarist/ multi-instrumentalist Marcos Garcia (who also plays guitar in Antibalas) of the band’s sound. 'Tony Iommi’s (Black Sabbath) innovation was to make the riff the organizing principle of a song. We are taking that same approach but employing a different organizing principle: For Iommi it was the blues, for us it comes directly from Africa.'

Sonically, on "You Will Know Nothing" the dynamic range is thicker, crisper and more powerful. It glistens as much as it blasts. The songs are even catchier, more anthemic, and the production reflects that of a band truly come into its own. Lyrically, it’s an equally more conceptualized effort that reflects upon states of being and consciousness — a driving force that carries throughout the words and moods of all of the band’s releases, interconnected to their trancelike music. Here Lies Man have honed their sound and their focus, and soon, you will truly know Nothing.


Garcia and Mann recorded the album much like they did the debut, at their own L.A. studio on a Tascam 388 8-track tape machine. Congas were later recorded by percussionists Richard Panta and Reinaldo DeJesus. Then, Garcia went to NY to record interludes with former Antibalas keyboardist Victor Axelrod. Mixing took the most time in order to find the proper sonic space for each layer of musical detail, with first album engineer Jeremy Page mixing the drums and the band tackling the remainder while also juggling a hectic touring schedule.

Barry says: Bringing the frantic, almost percussive snapping guitars over the top of galloping toms and distorted, psychedelic vox, Here Lies Man have presented a fascinating and head-nodding stoner throb to the masses. 'You Will Know Nothing' pits nuanced stoned heft against swooning, psychedelic groove to great effect.