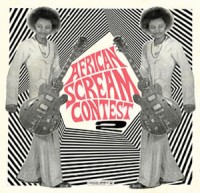 A great compilation can open the gate to another world. Who knew that some of the most exciting Afro-funk records of all time were actually made in the small West African country of Benin? Once Analog Africa released the first ‘African Scream Contest’ in 2008, the proof was there for all to hear; gut-busting yelps, lethally well-drilled horn sections and irresistibly insistent rhythms added up to a record that took you into its own space with the same electrifying sureness as any favourite blues or soul or funk or punk sampler you might care to mention.

Ten years on, intrepid crate-digger and Analog Africa founder Samy Ben Redjeb unveils a new treasure-trove of Vodoun-inspired Afrobeat heavy funk crossover greatness, featuring 14 tracks from 1963 - 1980. Right from the laceratingly raw guitar fanfare which kicks off Les Sympathics’ pile-driving opener, the previously unreleased “A Min We Vo Nou We”, it’s clear that ‘African Scream Contest 2’ is going to be every bit as joyous a voyage of discovery as its predecessor.

Where some purveyors of vintage African sounds seem to be strip-mining the continent’s musical heritage with no less rapacious intent than the mining companies and colonial authorities who previously extracted its mineral wealth, Samy Ben Redjeb’s determination to track this amazing music to its human sources pays huge karmic dividends. Like every other Analog Africa release, ‘African Scream Contest 2’ is illuminated by meticulously researched text and effortlessly fashion-forward photography supplied by the artists themselves.

The scene documented here couldn’t have been born anywhere else but in the Benin Republic, and the prime reason for that is Vodoun. It’s one of the world’s most complex religions, involving the worship of some 250 divinities, where each divinity has its own specific set of rhythms, and the bands introduced on the ‘African Scream Contest’ series and other compilations from that country were no less diverse than that army of different Gods. At once restless pioneers and masters of the art of modernising their own folklore, the mystic sound of Vodoun was their prime source of inspiration.