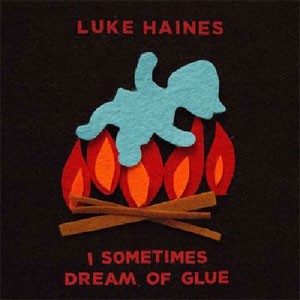 It started sometime after World War II – in the late 1940's. A convoy of British Special Services trucks had been dispatched to RAF Middlewych, their cargo - 10 tonnes of experimental solvent liquid. Sticky and deadly. The mission – to drop the toxic liquid over Germany and finish the job of carving up Europe for good. The trucks never made it to their airfield destination, coming off the road – most probably helped by saboteurs – some five miles out of London… 'I Sometimes Dream Of Glue' is the next solo concept album by Luke Haines (The Auteurs, Baader Meinhof and Black Box Recorder). Just off the Westway, in the motorway sidings, you can see a small sign. Actually you probably can't see the sign as it is the size of a child's fingernail clipping. The sign says 'Glue Town.' The name of a village. There is little or no documentation of Glue Town. You will not find any information about it on the 21st Century internet. Gluetown is a rural settlement born out of mutation. Of the estimated 500 or so dwellers, no one is thought to be over 2 ½ inches tall. The citizens of Glue Town exist on a diet of solvent abuse and perpetual horniness. The residents only leave to carry out daring night-time 'glue raids' on Shepherds Bush newsagent shops. On a tiny screen in the town centre, an old Betamax cassette of 'Michael Bentine's Pottytime' plays on a loop all day and all night...

1. Angry Man On Small Train
2. I Fell In Love With An Oo Scale Wife
3. I Sometimes Dream Of Glue
4. She Was As Ripe As A Meadow
5. The Subbuteo Lads
6. Solvents Cures The Ego
7. At It With The Tree Surgeon’s Wife
8. The Garden Gate
9. Everybody’s Coming Together For The Summer
10. Oh Michael
11. Only The Stones Will Know
12. Everybody’s Coming Together (Part 2)
13. Fat Bird From The Woodcraft Folk
14. We Could Do It