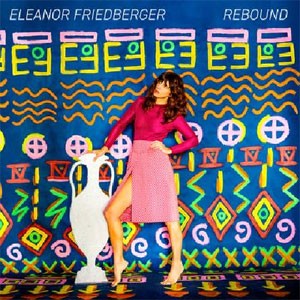 In contrast to her 2016 lauded album New View, which Eleanor arranged and recorded with her touring band, Rebound was recorded mostly by Eleanor alone with assistance from producer Clemens Knieper. The resulting album is an entirely new sound for Eleanor, exchanging live instrumentation for programmed drums, a Juno synthesizer, and muted guitars, creating a sonic landscape where influences range from Stereolab and Suicide to Lena Platonos and Yellow Magic Orchestra. In addition to a new sonic palette, Rebound takes significant inspiration from Eleanor’s time spent in Greece. Half-Greek herself, Eleanor frequently traveled to Greece to see family, but decided in 2016 to really immerse herself in the culture. Rebound is the incredible next step in a lauded, brilliant recording career by one of the most prolific, daring independent artists of our time. From her days spent in The Fiery Furnaces, creating melodically off-kilter, idiosyncratic mini-epics, to her three acclaimed previous solo albums, Eleanor Friedberger continues to create exactly what we need to hear when we need to hear it.