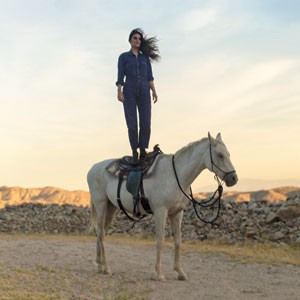 It’s a familiar story: fledgling singer does soul-sucking day job in order to fund their real passion during the nocturnal hours. Except Mattiel Brown, Atlanta’s rising star, is a rare exception to this time-honoured tradition: a fulfilled creative by day and night, albeit in different contexts. “It’s like I have two full-time jobs: designer and musician,” she says, humbly hip to her good fortune.

During office hours, Brown works as an ad designer and illustrator at MailChimp, a position she’s enjoyed for four years. “I work with a great video production team, in a great studio. Luckily, they’re a company that encourage side gigs.” Out of office hours, Brown swaps the design studio for the stage, a softly-spoken, chilled-out design nerd turned rock & roll belter, performing bold, vintage soul as Mattiel (pronounced ‘maa-TEEL’).

Brown grew up on a five-acre farm in rural Brooks, Georgia, the only child of a Detroit native. “My mom bought the farm in the early ‘90s. She had – still has – horses, so I learned to ride western-style when I was 6, 7 years-old,” (a skill Brown nods to in her cover art). “We had a vegetable garden and chickens. My mom would sell sheep’s wool and eggs. Before that, she’d been a professional set decorator working on films. She’s a really driven, creative person. I definitely inherited my work ethic from her.”

As an adolescent, Brown delighted in the ‘60s folk and pop of her mother’s limited vinyl collection: Donovan, Peter Paul and Mary, and Joan Baez. As an adult, relocated in neighbouring Atlanta, she’d sing along to the radio on the long drives to work: Screamin’ Jay Hawkins, Andre 3000, Dylan, Marc Bolan, Sister Rosetta Tharpe, and Jack White.

When Brown first began jamming with InCrowd, the Atlanta-based song-writing and production team behind her dynamite eponymous debut, she had no real designs on making a whole album and no game plan beyond the fun of “creating something out of nothing.” She said, “That process is always pretty astounding to me, and doing it with other people is even better.” But her producers, Randy Michael and Jonah Swilley, knew a good thing when they heard it: Brown and InCrowd had chemistry.

InCrowd’s founders, both skilled multi-instrumentalists, met in 2014, as session musicians touring with soul man Curtis Harding. Michael – an experienced player who’d co-written with Harding and racked up impressive session spots with the likes of Bruno Mars, and The Next Day-era Bowie – played guitar, while Swilley ¬(producer, writer and performer since age 9 and younger brother of Black Lips bassist Jared) played drums. On the road, they bonded over a mutual love of vintage R&R and ‘90s rap. “We discovered we both loved The Beatles as much as Jay-Z, Dylan as much as the Arctic Monkeys,” remembers Swilley. Back in Atlanta, once the Harding tour had wrapped, the pair formed a band, Black Linen, writing reverb-washed guitar music inspired by Tarantino soundtracks, by way of ‘60s Cambodian psych. Brown knew Michael from his days in The Booze, a popular local act who’d tour with OK Go before their demise. She’d kept track of him, aware that they shared a musical kinship. “[Randy] was the only person I knew who was into the music I was into.” When she reached out, asking to cut a Donovon cover record at Michael’s garage-turned-studio, Toco Electric, he was dubious. “I thought she'd have this little, whispery voice, you know? But she blew me away! She sounded like ‘60s-era Cher doing Dylan or something. I just knew she’d be perfect for the Black Linen stuff.” “We knew immediately that we wanted to work with her,” Swilley concurs. By then, around 2014, InCrowd were deep on a ’50s Leiber and Stoller bend, says Michael: “The Coasters, The Drifters, all that good stuff.” Bored with Atlanta’s “ultra cool” enclaves, they’d built their own scene, says Michael. They’d put on and promote reviews-style gigs, a 12-man strong house band (“our very own Wrecking Crew”) backing various InCrowd vocalists. “We were just making it happen, doing it ourselves.”

In the studio, Michael cut InCrowd records live, no overdubs, feeding everything through a rare analogue Peavey soundboard. “That’s how InCrowd rolls. What you hear on our records is everyone playing and singing together, in the same room, at the same time. We cut it right there, as it happens, and its either magic or its not.”

Mattiel’s process was just so: InCrowd supplied the instrumental compositions – raucous, swinging medleys frilled with organs and brass – while Brown provided vocals and lyrics, the latter often written freestyle, in situ. “That’s where the parallels between music and design really happen,” says Brown. “Your limitations – time, space, expense – push you to be as creative as you can with what you have.”

The resulting collection of songs is a dynamite salvo of retro-inspired rock & soul, from the gun-slinging stomp of “Whites Of Their Eyes,” to the string-laden self-affirmation of “Count Your Blessings,” penned by Brown after a spate of the blues brought on by a period of ill health. “Its a song I wrote for myself to myself, like 'you’re gonna get through this, you’re gonna be okay.'”

Mattiel’s sound might borrow from the past, but their art direction – Brown’s inspiring handiwork, of course – is decidedly forward-thinking, all colour block aesthetics (á la the White Stripes) and artful, design-savvy music videos. “I don’t wanna hit people over the head with like, bell bottoms and long hair and a Jimmy Hendrix outfit,” Brown laughs. “People have seen all that before.”

Mattiel is a “fresh mesh of retro and contemporary,” says Swilley, the latter thanks in large part to Brown’s vision, voice and on-stage energy. “She's very exciting to watch. She doesn't rehearse it or try to emulate anyone; she's just doing own her thing. And she's not fazed by the crowds [as evidenced during their shows to date: a recent, three-date support slot for Portugal The Man]. It’s kind of incredible really, because in person she's pretty chilled and softly spoken, but when she gets on stage...in the last six months, she's really been killing it.”

With a European festival circuit tour scheduled for this summer, Mattiel is no longer Atlanta’s best kept secret. Look out, world.

Andy says: This ace debut is an explosion of 60's....ooh: EVERYTHING! Classic, warm, garage riffing, soully melodies but with a huskily honeyed folky voice. And the songwriting is superb!