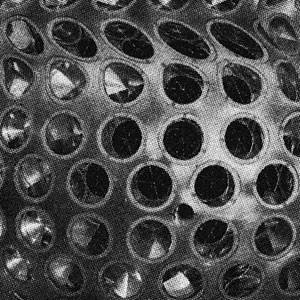 Following the release of the ’Audio Track 5’ EP and live performances at the Strelka Institute (Moscow), Barbican Centre and Tate Tanks (London), electronic producer and musician Darren Cunningham AKA Actress and the London Contemporary Orchestra (LCO) release a full album of their collaboration on Ninja Tune entitled ‘Lageos’.

Originally performed at the Barbican in February 2016, the project was curated by Boiler Room and LCO with support from Arts Council England and Ninja Tune. The music created a synergy between both live electronic and acoustic components, not just in the harmonies but in the way the traditional instruments were spliced into new hybrid instruments. As part of the process, Actress and LCO augmented traditional piano and created sounds from objects as varied as temple bowls and plastic bags. The show, a massive sell-out success, eventually lead to the release of this much anticipated album.

For the album, LCO recorded the individual instrumental parts as stems at Spitfire Studio then sent to Actress to manipulate, in turn delivering some truly unique new pieces. LCO also went on to reinterpret Actress classics ‘Hubble' and ’N.E.W' among others from his catalogue.

"In many ways the collaboration is about exploring an ambiguity of sound that sits between electronic and acoustic spaces; something that we’re aiming to push further as part of the live shows,” says the LCO’s Hugh Brunt of the collaboration. “For much of the set we look to realize as close as possible the timbres and colours of Actress’ electronics through acoustic means (which he in turn responds to); something of a physicalisation of those synthesized or sampled sounds. That has involved utilizing various accessories: plastic bags (for white noise or to emulate an EQ’d hi-hat); keys; Blu-Tack (to dampen the piano’s upper strings); milk frothers on harp strings, etc."

The project’s genesis was very much inspired by, as well as performed at, the mecca of brutalism – the Barbican Centre. Iannis Xenakis, a Greek composer and architect who would create buildings to fit his scores, and scores to fit his buildings was an inspiration, Actress and LCO took architectural layouts of the Barbican and created sounds directly inspired by its shapes.

Barry says: A less beat-driven adventure for Actress, focusing mainly on the texture and interplay between found sounds and a classical orchestra. Fitting in nicely to his previous dusty electronic workouts, Lageos is a fascinating and impeccably curated suite of brutalist ambience and avant-garde electronica.