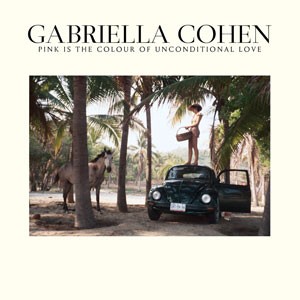 Australia’s sweetheart, Gabriella Cohen struck gold with the release of her internationally acclaimed debut, Full Closure and No Details in 2016. After extensively touring the album worldwide and sharing the stage with musical heavyweights like The Flaming Lips, Marlon Williams and Rodrigo Amarante, fans and industry alike embraced the dreamy, fuzz-soaked popscapes created by Cohen. The Guardian praised: “Seductive, broody and occasionally sinister,” and it drew four-star reviews from MOJO, UNCUT and Q Magazine.

In the summer of 2017, Cohen moved to a farm in countryside Victoria, Australia, to record and self-produce her second album with engineer and partner-in-crime, Kate ‘Babyshakes’ Dillon. There, amidst flocks of screeching white cockatoos and herds of Black Angus cows, they etched the beginning of Pink Is The Colour Of Unconditional Love. The record was almost complete when the band was invited to join Foxygen’s U.S tour, compelling the girls to finish the album on the road. Armed with a microphone and an interface, Dillon and Cohen captured the final touches on a boat in England, the coast of Portugal; in the mountains of Southern Italy, cafes of Mexico, and finally in Venice Beach, Los Angeles.

Pink Is The Colour is an expansive and exciting body of work, showcasing Cohen’s unusually refreshing twists on pop arrangements. ‘Baby’ was born in the graveyard of unrequited love, while ‘Music Machine’ became a swagger of sultry defiance set in LA. Throughout the new album Cohen creates complex and sugary backing vocals. These signature vocal arrangements—contoured with classic harmonies and nostalgic melodies—form songs remarkable in their originality. Honest heartache is woven into glory throughout the record, and during eleven tracks a candid, almost ethereal self-portrait of its songwriter emerges. For Gabriella Cohen, it’s an epitaph of electric wonder, and a definitive fact: Pink is the Colour of Unconditional Love.