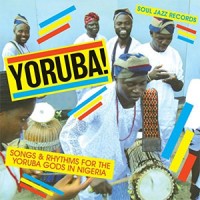 ‘Yoruba!’ features an array of local master drummers led by Olatunji Samson Sotimirin and singers (featuring the lead vocals of Janet Olufanmilayo Abe) performing heavyweight Afro-rhythms, with talking drums, Bata and Dundun drums and a mass of percussion in these deep spiritual and sacred songs used to honour and worship the traditional and ancient Yoruba gods in Nigeria, West Africa.

The enormous impact of Yoruba and West African music and culture is worldwide - from the first Afro-centric explorations of African- American jazz musicians in the 1950s such as Art Blakey, Randy Weston and Dizzy Gillespie, the explosion of Nu Yorican Latin music in New York City starting in the 1960s - Mambo, Boogaloo, Latin funk and soul - through to the sacred and powerful Afro-derived music of the religions of Santería in Cuba, Candomblé in Brazil and Voodoo in Haiti, which all came into existence on account of the Atlantic slave trade which began over 400 years ago. On a wider scale West African music remains the primary root of all African-American musical forms - from New Orleans jazz to Bronx rap, gospel, soul and more.

This album features songs honouring the Nigerian gods of the Yoruba traditional religion - Yemoja, Obatala, Ogun, Sango and others - as well as a selection of instrumental cuts focusing on the Bata and Dundun drums.

The album comes complete with extensive text and photography. 40- page outsize booklet / gatefold double vinyl and inners showing the influence of Yoruba culture throughout the world and the social and historical context for the music contained here.