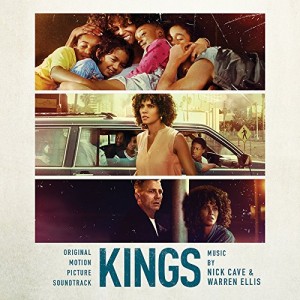 Kings is a 2018 crime drama film directed by Deniz Gamze Ergüven (Mustang). Set in 1992, it follows Millie (Halle Berry), a woman living in South Central Los Angeles who takes in at-risk youths to live in her home. When the infamous Rodney King riots grip the city, Millie and her cavalcade of adoptees are thrust into the mounting chaos sprouting all around them. In time, they are forced into unlikely alliances in order to stay alive

Scoring duties for Kings fall to Nick Cave & Warren Ellis of Nick Cave & the Bad Seeds fame. In recent years, they have become a force to be reckoned with in the world of soundtracks, thanks to their impressive work on films like Hell or High Water, Wind River, and the National Geographic series Mars. Cave and Ellis, the later a repeat Ergüven collaborator, pull from their rich history in the music world to deliver an unexpected score that immediately transports the listener to a specific place in time – the hot, angry streets of Los Angeles in the summer of 1992.