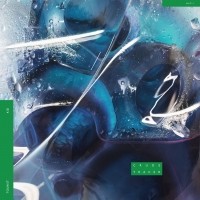 Tourist Kid's first release for Melody As Truth. Recorded in Perth and Melbourne between 2016 and 2017. Though the idea of movement between two places could be a somewhat romantic afterthought, a more palpable sense of dislocated unease creeps up on the listener throughout the album.

On "Discourse II", stutters of digital trash segue seamlessly into a plateau of serene, glassy ambience – and on "Bacterial", the hiss and sting of rehashed foley seems to dance around a plaintive, oh-so delicate piano solo. These striking contrasts are deftly managed, playing upon notions of digital noise and ambient, while never feeling weighed down by the limits of reference or gesture. Indeed, numerous touchstones to Tourist Kid's earlier work – and to that of contemporaries – are synthesized and expanded upon to great detail and atmosphere. "Crude Tracer" sits in its own adeptly nuanced and assured space.

Tourist Kid's production encompasses all manner of tangible and otherworldly sounds as a vehicle to explore something far more intriguing than a simple instrumental fetish – so much so that the overwhelming sting of blasted detritus or a broken and bent vocal is capable of eliciting such delicate impulses as glistening, heart-wrenching piano chords. It's a unique – and very special – kind of beauty that Tourist Kid gracefully achieves with "Crude Tracer”.