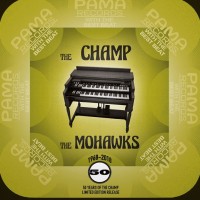 THIS IS A RECORD STORE DAY 2018 EXCLUSIVE, LIMITED TO ONE PER PERSON.

50 years ago, The Mohawks, a group of session musicians assembled by Alan Hawkshaw, released The Champ. This Hammond infused dance groove went on to be one of THE essential Hip-Hop samples of all time. Originally released in 1968, the legend of The Champ has continued to grow, there is a Wikipedia page dedicated to the track, and WhoSampled lists 641  tracks that have used it’s groove – an A list of Hip-Hop and Rap royalty including Eric B & Rakim, Mantronix, Afrika Bambaataa, Onyx, Nas, DJ Shadow, Method Man, Ice Cube, Easy E… and many more!  If it’s good enough for them, it’s good enough for you! Grab a slice of Hip Hop history for RSD 2018