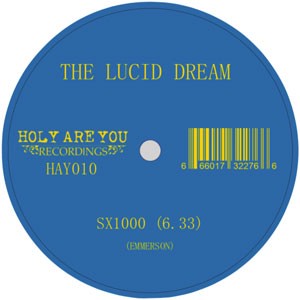 Record Label
Holy Are You Recordings

The Lucid Dream return in April with the release of new single ‘SX1000’, the first taster from the recently completed 4th album.

Driven by fans raising £10,000 to help replace all equipment robbed after a Paris show in early 2017, a new album became the instant focus for The Lucid Dream in the summer of 2017.

The track is a slice of pure acid house, and will again see them acknowledged for venturing into pastures new, setting themselves apart from ‘genres’, ‘scenes’ or what any other band are currently doing.

‘SX1000’, as with the whole album, was penned over the summer by Mark Emmerson (vocals/guitar/synths), using only the classic Roland 303/808 synths, bass and vocals as tools for writing.

Inspiration for the writing was formed via continuous listening to the Chicago to UK acid house works of 1986-1992, the focus predominantly on the groove. 5 months on from those writing sessions and The Lucid Dream have competed their 4th album in 5 years, this track a perfect indicator as to what awaits. A record made for the dancefloor.