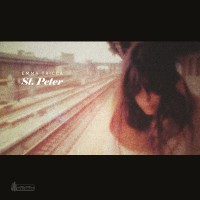 In life and music, Emma Tricca is an explorer. Just as ‪Davey Graham set sail for Morocco and ‪Vashti Bunyan for the Outer Hebrides in search of their elusive ‪muse, Rome-raised singer-songwriter Tricca has journeyed to London, New York, Texas and further afield to seek the heart of her own music. And like those renowned voyagers, she's returned with a set of songs that refresh the tired old folk form. Tricca's new album St Peter – created with a cast of supporting artists including global icon ‪Judy Collins, ‪Sonic Youth's ‪Steve Shelley and Dream Syndicate guitarist Jason Victor – takes a bracing plunge into the unknown, leaving the folksinger tag far behind with a rolling collection of reverie-inducing raw diamonds.

It was encouragement from ‪Pentangle legend ‪John Renbourn that started Tricca on her lifelong path. An aspiring young player, she met Renbourn after a solo gig in Rome and impressed him with her fresh-cut songs. A move to the UK was inevitable, gigging around folk clubs first in Oxford and later in London, honing her craft as a songwriter and a fingerstyle guitarist. Extended stays in New York and Texas followed, before Tricca returned to London to begin work on her first melancholic masterpiece, 2009's crystalline long-player Minor White.

The album was released on Bird Records, an offshoot of Finders Keepers run by husband and wife team ‪Jane Weaver and ‪Andy Votel, who'd been thrilled by Tricca's talent (and her Italian leather boots) at the Green Man Festival in 2006. They secured her a show at ‪Jarvis Cocker's Meltdown Festival in London, ensuring international exposure, a major European tour and a run of shows with her old friend Renbourn.

Five years later Tricca released Relic, an album even more poised and precise than its predecessor. Scoring rave reviews across the board – 4 stars in Record Collector and Mojo, 5 in Time Out – the album added gentle percussion and plaintive orchestration to the established pattern of hushed guitar and heartfelt vocals. A collaboration with longtime friend and guitar wizard Jason McNiff led to 2017's sparkling Southern Star EP, while a song on the soundtrack of Patrick Stewart-starring US indie film Match raised her profile. But encouraged by Weaver – who urged her to 'explore the weirdness' in her music – Emma Tricca was hungry for a new challenge.

The road to St Peter began with a chance meeting at South by Southwest between Tricca and producer and musician Jason Victor, and the formation of an instant friendship. During a Skype call one Christmas morning the pair decided to start work on a new project together, hauling in ‪Sonic Youth drummer ‪Steve Shelley and New York bass hero Pete Galub to help Tricca explore the rougher sound that was in her head. Recorded near-live at Echo Canyon West in Hoboken, the album draws on crunchy country rock, homespun psychedelia, Morricone soundtracks, New York underground grit and English folk grandeur to weave a wholly unique and surprising spell.

More musical guests soon joined the party – gruff songwriting hero ‪Howe Gelb put in a brief cameo, while Tricca was able to live out a childhood fantasy by inviting ‪Judy Collins to appear on the album's penultimate cut, Solomon Said. As a teenage folkie Tricca had recorded one of Collins's TV performances onto VHS, and worn the tape out trying to mimic her picking style. Now they were working together, on perhaps the album's most startling, transporting track.

The album is one so loaded with texture that is almost feels tangible, a rare record that feels precise and pristine in its executions but never sterile or lifeless. Electric guitars fizz away like a controlled electricity, Tricca’s guitar playing flows gracefully at the core with her vocals existing in the perfect state between slight rasp and caramel-smoothness. Shelley’s drumming and percussion gives a steady heartbeat to the record which is further brought to life by a variety of deft instrumentation, including piano, bass, cello, violin, glockenspiel and of course the variety of guest backing vocalists.

Whilst St Peter’s deep-seated roots can perhaps be traced to traditional folk music, its finished existence feels far from such a thing - its ever-flowing essence skipping through genres, tones, paces and rhythms with a gliding grace. Perhaps even a touch of the spirit of Hoboken’s own Yo La Tengo has seeped into the finish record in its quiet yet stirring beauty.

Barry says: Moving from haunted demi-melodies and tenderly plucked guitar, imbued with tastefully echoing reverb and Tricca's delicate voice, influenced by decades of classic Americana and folk but sounding like none of the above. Brimming with emotion, and thoroughly enchanting. Superb.

The Don't Fucking CaresUnderage Demon / Nihilism Is A Fact Of Life