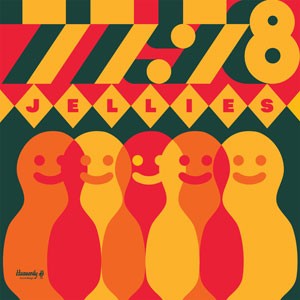 77:78, the new project from Aaron Fletcher & Tim Parkin, card carrying members of the musical kaleidoscope that is The Bees.

Set to pick up where the Bees left off, the album was recorded at Studio Humbug on the Isle of Wight and musically picks it way from sublime west coast harmonies that recall the frayed beauty of the Beach Boys Smiley Smile , to the ramshackle dub of King Tubby via the playfulness of early Syd Barret. The album will be available on coloured orange vinyl.

“Some musicians and bands definitely have their sound and stick to it, which is fair enough, but that’s just not us. Whenever we’re in the studio we’re constantly inspired to go down different musical paths, which I suppose is why the record we’ve made sounds so diverse. “

Barry says: Perfect hazy summer psychedelia, with echoes of 60's classics, imbued with the preceding decades of production knowledge and influences make this ex-Bees side-project more than the sum of it's considerable parts. Brimming with musicality and oozing vibes, this is a summer stormer.