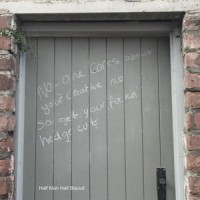 Famed for making ill-tempered music with a social conscience, Birkenhead band Half Man Half Biscuit, formed in the early eighties, ‘merely as a way of getting through the day’. Quickly picked up by the angst-ridden youth of the eighties, their punk driven, lyrical rants, and protests against all things celebrity and fake, became the unofficial anthems of the underground.

Barry says: Another classic title from the HMHB camp, and fortunately the music is as entertaining as the cover is, with their trademark ska-lite jangle and throbbing spoken word oddities in full force, this is yet another superb outing.

Half Man Half BiscuitAnd Some Fell On Stony Ground