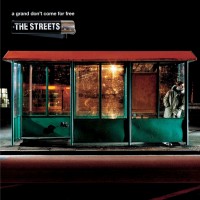 When faced with the unenviable task of following up the instant classic that was his genre defining debut, Mike Skinner decided to channel his observational lyricism and home made beats into a concept album about a geezer on holiday, on the prowl, on the con and out of luck. Whereas 'Original Pirate Material' was a record that garnered acclaim from the electronic / dance fraternity and the forward-thinking wings of the rock / mainstream press, 'A Grand Don’t Come For Free' swept the board in prompting critical praise. This was the album that saw Skinner compared to the likes of Ray Davies and Paul Weller in evoking the glorious mess of everyday life. A striking concept album set to an inventive sonic backdrop, the seemingly prosaic tale of a young man unlucky in love (and, so it seems, money) is brought brilliantly to life in a barrage of astute lyrics, lurid tales and memorable hooks. Deservedly awarded a 9.1 review from Pitchfork, the record sees Skinner reveal his most vulnerable self: 'Dry Your Eyes' and 'Blinded By The Lights', in particular, manage to articulate painfully familiar feelings that appeal to music fans of every hue. This record marked Skinner’s creative peak, received international acclaim and, thanks to its distinctiveness, propelled its maker to the top of the musical tree.