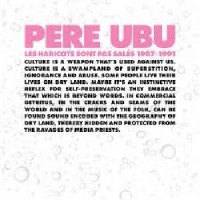 Third, and final, box set includes ‘The Tenement Year’ (1988), ‘Cloudland’ (1989), ‘Worlds In Collison’ (1991) and ‘Lost Album’ (1989). With Pere Ubu on hiatus since 1982’s excellent ‘Song Of The Bailing Man’, David Thomas had recorded a much-praised solo album and the band had now signed to a major label. In a period of rampant world commercialism, what would happen next? Another crucial era for the band unraveled, Pere Ubu’s journey charted new undulating territory and so began a three-album escapade that retooled our understanding of what pop music is. The third in the four-part boxed set series, ‘Les Haricots Sont Pas Salé 1987-1991’ sits between ‘The Architecture Of Language 1979-1982’ and ‘Drive, He Said 1994-2002’. “Solid as the band can be, it's also likely to dissolve songs from the bottom up.

For all Pere Ubu's uncertainty, the band isn't arbitrary; its music has the off-the-wall unity of a Marx Brothers routine,” said Jon Pareles of The New York Times on ‘The Tenement Year’. One year later and things were further obscured with ‘Cloudland’ when they released “their industrial-strength equivalent of a class Beach Boys album from musicians more familiar with factories than surf.” (Greg Kot, Chicago Sun Times). Then, in 1991, ‘Worlds In Collision’ became “the most atmospheric, carefully sculpted recording in the band's 13-album catalog.” (Tom Moon, Spin). Here we have Pere Ubu between 1987 and 1991 with three phenomenal pop albums, together with the ‘The Lost Album’, an 11-track record of demos that sounds like they’d loosened the nut and bolts of the genre even further.

Four of these tracks, ‘Around The Fire’,’ Down By The River’, ‘Like A Rolling Stone’ and ‘Invisible Man’ were recorded as demos for the album originally designed to follow ‘Cloudland’. Referred to by the band as ‘The Lost Album’ they are now joined with songs from ‘Cloudland’ that wouldn’t fit on the original vinyl release due to the length limitations of vinyl. The record also includes a tribute to Van Dyke Parks ‘Wine Dark Sparks’ and ‘Bang The Drum’ inspired by a Van Dyke Parks song. Genius.

1 Something's Gotta Give
2 George Had A Hat
3 Talk To Me
4 Busman's Honeymoon
5 Say Goodbye
6 Universal Vibration
7 Miss You
8 Dream The Moon
9 Rhythm King
10 The Hollow Earth
11 We Have The Technology….

1 Oh Catherine
2 I Hear They Smoke The Barbecue
3 Turpentine!
4 Goodnite Irene
5 Mirror Man
6 Don't Look Back
7 Worlds In Collision
8 Life Of Riley
9 Over The Moon
10 Cry Cry Cry
11 Playback
12 Nobody Knows
13 Winter In The Firelands….