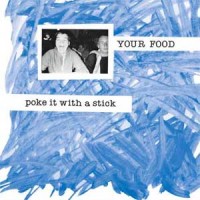 ‘Poke It With A Stick’ - the only record by Louisville legends Your Food - is a sui generis gem of the American underground, now faithfully reissued for the first time by Drag City. Recorded in 1983 by four scarecrows from Kentucky subsisting largely on cheap beer and baked beans, the album is a burbling burgoo of hypnotic rhythm, uncoiling tension, and sharp invective - a proud bastard of post-punk royalty.

Slint drummer Britt Walford remembers seeing Your Food at age 11: “You knew you were in the presence of something powerful whenever they played. Their sound was open and catatonic. Cathartic. You recognized it right away. A lot of it was based on the bass, which was cool, and the drums were expressive, too. Like the bass, they were simple, but odd and insistent. The guitar was angular and somehow just as present as the bass and drums, which seemed like the center. Doug’s singing went right along with it. He was mocking and smart, then bare and vulnerable, without being vulnerable.”

In the fall of 1981, the residents of 1069, Louisville’s original punk house, began to spy three teenagers lurking outside the decrepit environs. Eventually the teens grew bold enough to approach, and soon two, John Bailey and Wolf Knapp (“that’s my real name, not my punk rock name”), were learning guitar and bass in the trashed rehearsal space within. “Their practices seemed interminable at first,” remembers Charles Schultz, “and then picked up confidence and momentum.” Charles had been the drummer for Louisville’s recently defunct Dickbrains, a band described by the Village Voice as freaky weirdos who couldn’t fit in if they tried. He started playing with John and Wolf. Douglas Maxson, the Dickbrains male singer, was lured back from New York with the promise of beer and cigarettes and soon Your Food were playing weekly shows at the local Beat Club, mostly for free beer. (The third lurking teen, Janet Beveridge Bean, formed left-of-the-dial, cracked country act Freakwater with Dickbrains guitarist Catherine Irwin.)

Financed by a Pell Grant and what little cash the band could scrounge, the album was cut largely live in the studio by a guy who usually recorded church groups and self-released on the band’s own Screaming Whoredog label. The prevailing themes of restlessness and isolation are palpable in songs like opener ‘Leave’, where ennui morphs into dark comic fantasy. The punk funk of ‘Don’t Be’ fits perfectly with the downtown NYC groove of bands like ESG and Bush Tetras. Doug’s sardonic wit laces each song with trenchant, first-class put-downs. “Everybody really wants to be your friend / Shit, I wouldn’t even want to talk like you.”

The band became big brothers and bad influences for prepubescent Slint project Languid And Flaccid (which included Will Oldham’s elder brother Ned). It was a golden age but a waning one, an adolescent state before hope or commercial prospect or any plan for the future. When no one gives a damn what you are doing, you are free to do what you want.

Your Food managed three short tours in a world before cell phones, social media, or global positioning and earned the admiration of the few who heard them but they were sonically out of step with the then-dominant hardcore scene, where speed and aggression alone were valued. It all came to a spectacularly bitter end on the side of some frozen, forlorn highway in West Virginia. The tour van broke down three times in four days. The money for the planned second album went to repairs and the band, beaten and broken, called it quits.