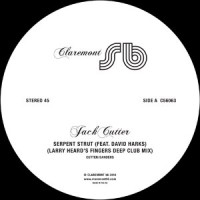 Bonus cuts from the Claremont 56 Box Set featuring tracks and mixes not featured on the original release. Chicago legend Larry Heard is joined by UK mainstay Andy Meecham in his EMperor Machine alias as they remix the amazing Paqua and Jack Cutter. First up, "Serpent Strutt" by Jack Cutter gets a spacious and soulful rerub by Mr. Fingers who emphasizes the relaxed nature of the track through a beachy, waves lapping at your ankles kinda vibe that really resonates with the OG whilst simultaneiously shining a light on Larry's unique, effortless style.On the flip, EM takes Paqua's "Ruby Running Faker" into squelchy new disco territory complete with boogie bass, dubbed out delays and echo laden hand claps. Rock solid but with a bit of give around the hips, this'll make ideal warm up tackle... Super limited and really quite good - you know what to do!

Matt says: Nice Brucey bonus for fans of the ultimate Balearic collection. Larry Heard and Emperor Machine's remix never made the boxset, but they're more than worthy additions to this most pretigious collection. Super limited too so don't dilly dally.