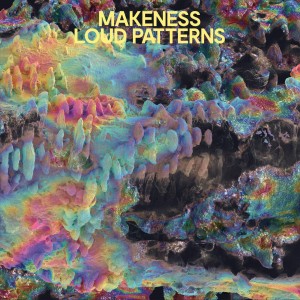 Makeness drops his debut album, "Loud Patterns" on the Secretely Canadian labe. Crafting tracks which make a virtue of disparate influences, Kyle Molleson manages to pull off something difficult: songs which have been tirelessly worked on, although sound loose-limbed and to-the-point.

"Loud Patterns" is noticeably indebted to house and techno; there are 4/4 rhythms, and a no-nonsense directness that harks back to the Detroit pioneers. Channeling avant-garde experimentalism and an outsider’s interest in pop, Kyle embraces the distance between those two poles.

Cosmic Slop, an underground institution in Leeds, was another touchstone. As Kyle recalls,'That place was definitely an awakening in terms of dance music.' It boasts a hand-built, peerless soundsystem, a near-pitch black dancefloor and a music policy that ranges from Dilla instrumentals to Detroit house. It takes dance music away from regimented structure, fashion and trends and into a freeform world of creative, one which Kyle thoroughly embraces.

"Loud Patterns" arrives after a series of releases that have established his particular, in-between approach to dance-minded music. He put out two EPs on Manchester-based imprint Handsome Dad, a one-off single with Adult Jazz and self-released Temple Works EP; Whities also released a limited-edition white label of a Minor Science dub of one of his tracks.

Containing single, “Stepping Out Of Sync" - 'for me is about losing a little bit of a grip on reality,' says Kyle. 'There’s a big nod to the world of pop music in the track and I wanted to reflect that in the video too. Josha and Felix, who directed the video, came up with this great time splicing technique using a custom 3-camera rig. The idea was to use the technique as a character in the video to add a sense of detachment from reality and subtly invert the upbeat aspect of the music. I had also been talking to my friend Maddie who is a brilliant dancer about working on some choreography for the video. These aspects seemed to come together perfectly when Josha and Felix started sending ideas across. I think the video really captures the range of emotions that exist in the track, it’s upbeat and positive aspect alongside a layer of dissonance and confusion that lies under the surface.'.