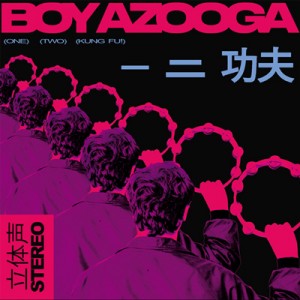 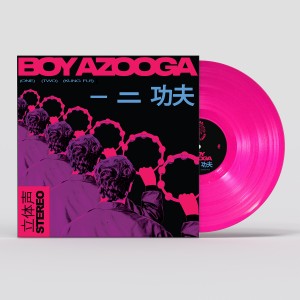 A prodigous musical talent, Davey Newington is a young man with a rich musical heritage. One of his granddads was a jazzer who played drums for the Royal Marines. Davey’s dad (violin) and his mum (clarinet) both played, and met, in the BBC National Orchestra Of Wales. Davey himself took up drums at the age of six and also enjoyed orchestral engagement, playing in various Welsh Orchestra’s and Jazz bands as a teenager as well at latterly finding gainful employment playing drums as part of Charlotte Church’s Late Night Pop Dungeon.

Inspired by his art teacher at school who sent him off to town to buy Can’s Ege Bamyasi, taking musical cues from the likes of Sly & The Family Stone, Caribou, Black Sabbath, Outkast, Van McCoy, Ty Segall and The Beastie Boys and with arrangements which carry the wonky tunefulness of The Super Furry Animals they nabbed their name from the 1994 film The Little Rascals.

With a Davey recruiting friends Daf Davies, Dylan Morgan and Sam Barnes to form the Boy Azooga live quartet, an ensemble that swings smoothly from filmic instrumentals to a churning, rave-tinged rock that hints at both Can and their progeny, the Happy Mondays, the band played a number of headline and support shows across the U.K. at the end of last year, including a manic sold-out hometown show in Cardiff at Clwb Ifor Bach almost a year to the day they made their debut in the city at the same venue.

They take their loose-limbed live show on the road later this year and the dates include their own headline shows, support slots with The Magic Gang & Rolling Blackouts and Coastal Fever and an appearance at this year’s Heavenly Weekender at the Trades Club in Hebden Bridge.

Barry says: Brilliant work here from Cardiff's newest prodigal talent, Boy Azooga. I have it on good opinion that Davey is a 'Lovely. happy chap' (Graf, 2018), but I can tell you that he is indeed a venerable talent, and deserving of every bit of praise this soaring psychedelic-indie-synthy wonder garners. Fully brilliant.