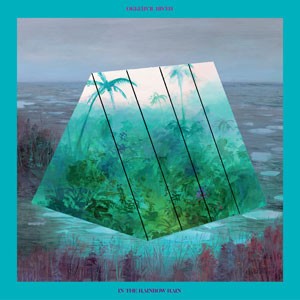 In The Rainbow Rain' - produced by Sheff and mixed by Shawn Everett (Perfume Genius, Alabama Shakes, The War on Drugs) - serves as showcase for Sheff's writing and the musical interplay of his new band mates, Benjamin Lazar Davis (bass), Will Graefe (guitar), Sarah Pedinotti (keys) and Cully Symington (percussion) - the same iteration of Okkervil River that joined Sheff on the Away tour. Recalls Sheff of that tour: "It was my favorite touring experience in many years... I felt like a kid again. I realized how phenomenally lucky I am that I've been able to play music for this long."

Sheff and the band started work on the new album shortly after the end of that tour - and the presidential election. "If December 2016 was good for anything, it was good for writing songs," he says. Galvanized by the seismic events of that Fall and the following year, Sheff, sometimes co-writing with his new band, channeled his outrage and sadness into music intended to be hopeful, healing and uplifting. Inspired by the Quaker meetings he had been attending, Sheff injected the album with undercurrents of spirituality and gratitude. The result is something akin to a modern secular gospel record, and among the best music of his career.

Highlights include driving, melodic anthems "Love Somebody" and "Pulled Up The Ribbon," and "Famous Tracheotomies," which chronicles notable figures who've endured the titular procedure, including Gary Coleman, Dylan Thomas, Ray Davies, and Sheff himself. "In places, the record deals with heavy things like trauma and betrayal and shame, but, actually, it's supposed to be a good time," says Sheff. "I hope it's something fun, that makes people feel happier

Andy says: With hints of smooth synthpop mixed in with the usual swooning indie anthems, Sheff has managed to sacrifice none of his original appeal whilst bringing in the considerable talents of his new bandmates, somehow simmering into a cohesive and enjoyable whole.