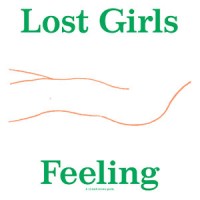 Lost Girls, the new project by Norwegian avant-pop artist Jenny Hval and multi-instrumentalist Håvard Volden, conjures sounds and moods displaced from specific moments in time, existing purely in the moment but tantalizingly just outside of one's reach. The project's inaugural release, the two-track “Feeling” EP, presents a pair of extended compositions, alternately contemplative and crackling with energy, that complement each other in sound and approach while offering a unique and cohesive vision. It is out March 2nd via Smalltown Supersound.

Hval and Volden have known each other for more than a decade, the latter playing regularly in Hval's live band; in 2012, they released an album together as Nude on Sand, but instead of resurrecting that moniker, Hval and Volden opted for a fresh start, taking nomenclatural inspiration from the 2006 graphic novel by writer Alan Moore and comics artist Melinda Gebbie.

The two compositions that make up the “Feeling” EP, "Drive" and "Accept," are the results of ongoing work that took place over the past three years. The first track, "Drive," is the final recorded version of an extended composition that's been a staple of Hval's recent tours over the past several years. "It kept changing because we were improvising a lot together," she states, and that shapeshifting nature is reflected in the track itself: over thirteen minutes, frissons of electricity and hand drums give way to a persistent beat and shimmering synths that are as menacing as they are strangely serene. Above it all is Hval's vocals, delivering meditations on the nature of performance, gender, and ownership of one's self and the material things that exist in our lives. The lyrics to "Drive" also underwent many changes during the track's living gestation. "I was using words to make sense of time and music—lyrics as a compositional tool—which I found really interesting, this interplay between words as meaning and words as something that could build musical structures."

"Accept," originally recorded four years ago by Volden, is quite the left turn from the lyrical interplay and relatively formal structure of "Drive"; the eleven-minute composition is atmospheric bliss, with jagged guitar tremolo, free-jazz drumming, and intense synths puncturing pockets of silence as Hval's voice wordlessly snakes in and out of frame.

Even though Hval and Volden have played shows in Oslo, parts of the material captured on “Feeling” won't—and, due to the pair's complicated recording setup in Oslo, for the moment can't—be replicated live: "This is the death of the material," Hval explains cheerfully, "and the transcendence from being something ever-changing to something we can give to others that doesn't belong to us anymore. It's also an opportunity for us to keep making things."