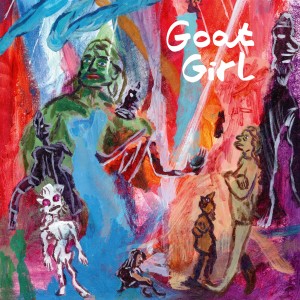 Goat Girl belong to a burgeoning, close-knit south London scene, born in venues like The Windmill in Brixton and including bands like Shame, Bat-Bike, Madonnatron, Horsey, Sorry, and many more. “We help each other - I put you on, you put me on - because we genuinely like each other’s music. We’d played gigs all over before but never really settled in a comfortable environment, which is what The Windmill is. It’s an important place for us, it was the first space that our music made sense to exist within. It’s a safe space where music is genuinely listened to and appreciated, and where laws and licensing haven't reached over to ruin the venue.”

This live freedom enabled the band to think without constraints when it came to recording. Goat Girl enlisted producer Dan Carey (The Kills, Bat For Lashes, Franz Ferdinand) to help them capture their vision, set a goal to write and record a piece of music in a day in effort to capture that raw first-creation moment, and chose to record to tape.

It’s a very English album -- sharp-eyed observations like The Kinks, louche rage like The Slits -- but it’s also full of swampy, swaggering guitars and singer Lottie’s filthy drawl. Each member brings a diverse range of influences and contributions, ranging from krautrock to bossa nova, jazz to blues. They resist being boxed in to an indie, guitar-based genre, and focused intensely on the layers and textures of each song as well as the different contexts they could sit within.

The result, Goat Girl, succeeds in conjuring a complete world all unto itself, and is arranged in segments -- divided by improvised interludes -- that offer glimpses of an even stranger parallel universe. With each song acting as its own story of sorts that features different settings and characters, listeners are transported therewithin. It’s dark yet cheeky, varied yet cohesive, and striking in its vision; this world is populated by creeps and liars, lovers, dreamers, and wonderful lunatics. Lead single “Cracker Drool” is at once jaunty and sinister, a foreboding tale full of swirling guitar, echoing vocals and synthetic drum hits that stumbles and gurgles straight into “Slowly Reclines,” an equally menacing and considerably heavier track. “Creep” is, predictably and grimly enough, inspired by actual events: Creep on the train / I really want to smash your head in.

On “Country Sleaze,” she sings about sex in a way that embraces visceral reality and defeats shame. “If you say you’re sexually free, as a woman, society still deems that a bad thing. But really it’s a beautiful thing to be confident in yourself - to know that you can have sex and it doesn’t have to mean anything and that doesn’t make you a bad person.” Ellie smiles: “That song is quite disgusting, in a good way. It’s not trying to be nice, it’s not a love song.” Goat Girl is altogether an album crafted with intention, and invites imaginations to run wild; it draws listeners in to its half-fantasy world from the slow fade, eerie instrumental intro “Salty Sounds,” to the gorgeous, unsettling closer “Tomorrow” -- a rendition of the song featured in Bugsy Malone -- which ends with dawn-chorus birds and the feeling of new possibilities after a long and messy night.

Darryl says: A superbly textured and stylistically varied outing from Goat Girl, holding within it's 19 tracks a fiery resolve and melodic leaning of the highest order. Brilliantly written and performed with heart!