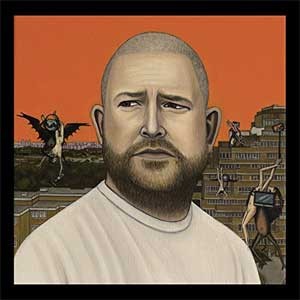 When we last saw Raf Rundell he was stood in a clearing, dressed in a shaman’s robes with a modern day magik staff raised above his head. Looking like the special guest DJ at a post-apocalyptic orbital rave, South London’s finest looked ready to take on all comers.

As one half of the 2 Bears and the self-styled Selfie Boy, he was finding his feet as a solo artist - his first mini LP (‘The Adventures Of Selfie Boy Part 1’) was garnering glowing writeups in the rock press as well as electronic magazines. However, just after the record was released, the world around him changed forever.

Put side by side, the birth of a new child and the rapid rise of a generation of Post Truth politicians don’t appear to have much connection. Seen through the eyes of a sleep deprived postmillennial two-time dad, however, these seemingly separate occurrences knot together into one paranoid, helpless, loving whole called ‘Stop Lying’.

“I think ‘Stop Lying’ feels fairly apposite for our time; it’s my regular cry of help and sanity. It’s the result of a bit of pub talk between me and some mates, the best kind of ‘high’ concept really. It was a desperate cry in the lead up to the last General Election and it quickly became a mantra that I shouted at the TV the whole time. It’s ended up working pretty well with my children… and me.”

One can’t be certain if it’s the age we live in or the age of his youngest that’s most heavily influenced ‘Stop Lying’ - whichever it is, it’s managed to make something pretty close to a perfectly reflective post millennial pop record. It’s Raf’s most confident and strident set of songs to date.