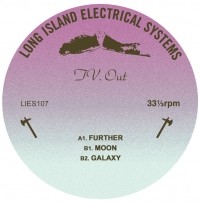 Tel Aviv based two man project TV.OUT has been making a name for themselves these last years putting on impressive live sets, djing around the world, and running their Paralaxx imprint releasing various strains of rugged, well informed electronic music. On their debut for L.I.E.S. we get a smoking three tracker spanning styles that would not seem out of the place being played on the West Coast of Den Hague in the late-90s. Think early Legowelt meets Coca Disco meeting heavier techno sounds as a starting point. Club gear for the gearheads. The electroid snap of "Further" gives way to the techy pulse and melancholic synths of "Moon" before the bristling perx of "Galaxy" takes us down a darkroom wormhole.