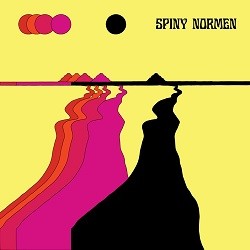 “Circa 1976, Gerry [Diaz] and I would skip class, smoke whatever scrap of contraband we could scrape together and meet in the high school auditorium where there was a piano and bang out crunchy rhythms. Gerry was playing guitar, listening to Alice Cooper, hair down to his back and about the only MexicanAmerican in a white bread school. He was cool! So when he said one day, ‘Hey man we should jam some time,’ I was stoked. I found an ancient Vox Jaguar that had belonged to Fever Tree and a Kustom amp that I blew out just right, that made the most beautiful distortion, accompanied by a beloved phase shifter. Over the next three years we began to experiment, spending months penning intense, bizarre, surreal and mind-affecting pieces influenced by King Crimson, Pink Floyd, film soundtracks, Van Der Graaf Generator, and the like. I was collecting keyboards: a mellotron, a single-key-play Moog... Gerry was adding echos, early guitar, synth and tons of pedals. I learned the flute. In we went with a hired stand-up bass player and little engineering knowledge to the community college 8-track recording studio and just played like psychedelic Mozarts. Timpani, live effects, sound effect records, backward echo, violin bow on guitar and plenty of echo. Gerry and I on vocals. What came out was still, to this day, in my humble opinion, some very complex, untouched territory, holy-what-the stuff. We were all about 19.” - Steve Brudniak (cofounder of Spiny Normen).

1. Arrowhead
2. Wrecko Wild Man Ride
3. Carry Your Water
4. The Monkeyweasel
5. To Meet The Mad Hatter
6. The Bell Park Loon
7. In The Darkness Of Night
8. The Sound Of Younger Times