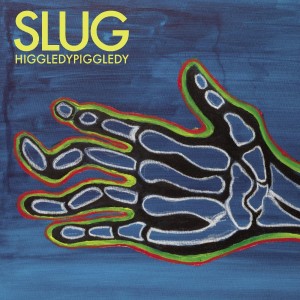 Slug is the nom de plume of North East native Ian Black and, whereas acclaimed debut album ‘Ripe’ was made in collaboration with Peter Brewis and David Brewis of Field Music, ‘HiggledyPiggledy’ was composed, produced and played entirely by Black, enabling him to give free reign to his beguiling brand of Dada-rock.

Lead track ‘No Heavy Petting’ was consciously written to be an aggressive album opener, which pokes fun at Black’s own Mary Whitehouse-esque response to the sexualisation of music on television.

The album was inspired by a combination of The Residents, John Carpenter and the soundtracks of Don Cherry (particularly ‘Holy Mountain’) and Masahiko Sato (particularly ‘Belladonna’) plus the Dada art movement which will be self-evident to anyone who’s seen the hilarious and life affirming Slug live experience, replete with ever changing stage wear (snooker players, sailors, 50s jazz combo) and spontaneous crowd participation.

Black intended ‘HiggledyPiggledy’ to be a more minimal affair than debut ‘Ripe’, focussed more on rhythm and percussion. Thematically the record was written against the backdrop of political turmoil but really it’s about the strange life Black leads in his native Sunderland, an autodidact outsider living his life in Wetherspoons arguing with some of the questionable attitudes of locals. Blacks stated aim to “have fun writing truly horrible lyrics,” playing characters “venting in pubs, writing in the character of how some people think and behave.”