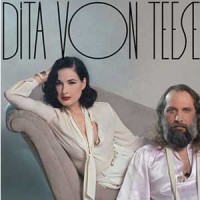 Alabaster face and cherry red lips, curves often outlined by a black satin sheath, Dita Von Teese sings about the power of seduction and the ecstasy of letting go in an album bearing her name, written and composed by Sébastien Tellier. Previously recording with Monarchy and Die Antwoord, though Von Teese stresses she's no professional singer. '...nothing compares to this project with Sébastien Tellier. Having been a fan of his music for a long time, I would go to see him play live in California and, when I performed for the first time at the Crazy Horse in Paris, I invited him because I was such a fan, not daring to imagine that someday he would compose an entire album for me' For his part, Sébastien Tellier has long dreamt of composing for a woman, but was not inspired by any of the professional singers. “When I saw Dita dance to a piece of music I had written for her, I had a feeling that her physical presence and her personality were a perfect fit with my music and I started to compose only for her...My wife, Amandine de La Richardière, wrote some sexy pop lyrics to balance the melodrama of my tragic vision that love always ends - in my songs - in bitterness and regret.” Recorded in Sydney, Los Angeles and Paris, “Dita Von Teese” owes much to the talents of composer Sébastien Tellier, the singing of Dita Von Teese and the art of two instrumentalists—the programmer and keyboard player, John Kirby, famous for his work with Solange, Blood Orange, and Money Mark, and Daniel Stricker, the drummer of the Australian group the Midnight

Patrick says: As far as I'm concerned Sebastien Tellier can do no wrong, and I was delighted to hear the bearded bard was doing a Gainsbourg (not literally) and teaming up with a sultry (occasional) songstress for an LP of sensual pop. Bursting with the beautiful melodies, delicate chord progressions and divine compositions we've come to expect from the Frenchman, coupled with Dita's sexy-stroke-subdued vocals and irresistible Euro-pop production. Imagine Lana Del Rey fronting Antenna during MTV Spring Break.