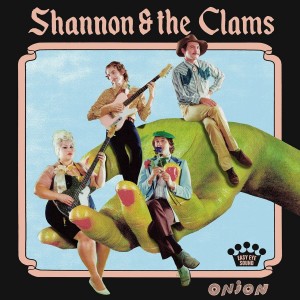 Shannon & The Clams will release their fifth studio album, Onion, via Dan Auerbach's Easy Eye Sound label. The album features the lead single, ‘The Boy’, with a video directed by Ryan Daniel Browne, described by Noisey as ‘a sparkling, hook-laden track that immediately gets under your skin with its wall-of-sound chorus, rife with crisp guitar strums, cascading riffs, and raw harmonies led by vocalist-guitarist Cody Blanchard.’ Onion, produced by The Black Keys front man Dan Auerbach at his Nashville studio, finds a finely tuned and tour-tested band stretching out from the 60s-inspired, surf inflected rock that has defined their previous releases, and delves into genres including soul and psychedelic pop. On their new LP, the band explores themes of origin and self-determination, loss and recovery, and the power of community to heal after tragedy. “It’s okay for people to interpret the songs,” Shannon Shaw says. “You can put your own story into it if that helps you heal. I just want people to feel something, whatever it is.” Recently, the band has been confirmed as openers for the 20-date Easy Eye Sound Revue Tour, with Dan Auerbach, Shannon Shaw, and Robert Finley.

‘Shannon Shaw’s star is certain to ascend dramatically in 2018.’ – Mojo.

Shannon & The ClamsYear Of The Spider

Shannon & The ClamsGone By The Dawn