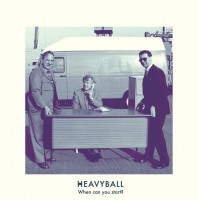 "When Can You Start? recounts a week in the life of an ordinary office worker. The diary of a nobody who represents everybody. He doesn’t know it, but this week is different. Because this week is his last on earth.

Storytelling, humour and everyday observations wrapped up in sharp melodies. When Can You Start? is a story of the very ordinary told differently.

The first track to be released from the album is ‘Top of Your Game’. You used to be someone, you used to be a contender. Now you work in an office doing nothing of consequence for people you hate. The memories are still there though, and there’s still a small chance you could still make it big! Upbeat, uplifting, a hint of melancholy – this is Heavyball!

Heavyball are a self titled ‘new tone’ 4 piece band originally from Nottingham; signed to Magnetic North Melodies. They describe their sound as 'new tone', a modern interpretation of two tone and ska. Influences include Viz, Shane Meadows and the story writing traditions of country and western. "