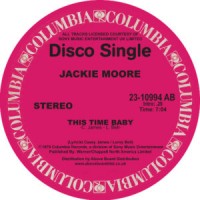 Jackie Moore's 1979 disco bomb "This time baby" is pretty much as classic as it gets. An unfailing floorfiller that found fame on the dancefloors via DJ's like David Mancuso, Larry Levan and Ron Hardy, it is the epitome of a roof-raiser. Produced by Philly legend Bobby Eli (MFSB, Salsoul Orchestra, Stylistics, Barbara Mason) and mixed by underground Disco legend John Luongo this is an essential 12". Originally performed by The O-Jays Jackie's version ramps the energy right up to the max and cranks the heat up to 100. Everything is here, killer driving drums and percussion, THAT bassline, those drops, the cowbells, horns, strings and of course...... Jackie! This is a straight repress of the '79 pressing on Columbia and features the sweet b-side 'Let's Go Somewhere And Make Love', another breezy Philly number courtesy of Mr. Eli yet again. All round quality.

Patrick says: A true disco hitter which never quits, Jackie Moore's version of "This Time Baby" scores a perfect 10 for bassline, groove, vocal power and melodic energy. Get it bought!