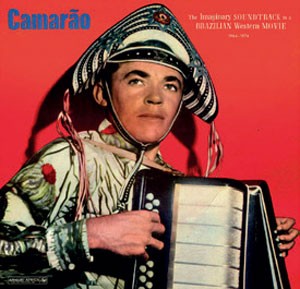 One of the greatest accordionists in Northeast Brazil, Reginaldo Alves Ferreira, better known as Camarao(Shrimp) or Maestro Camarao, was born in Fazenda Velha, Brejo da Madre de Deus, Pernambuco, on 23 June 1940. He learned to play accordion by watching the movements of his father, the accordionist Antonio Neto, who took him to parties where he played. After that, according to him, he perfected his skills by listening to Luiz Gonzaga and studying the method of Mario Mascarenhas.

He played at the region’s fairs, raffles and patron festivals. He developed his artistic career in the city of Caruaru. The title of ‘Maestro’is not from his education, but rather given to him by broadcasters. At the age of 18, he met Luiz Gonzaga, whom he considers his master despite not forgetting his father’s teachings. He was a great friend and partner of the ‘rei do bai o’(‘King of Bai o’- Luiz Gonzaga’s nickname), with whom he participated in 28 recordings, including LPs, 78rpms and CDs.