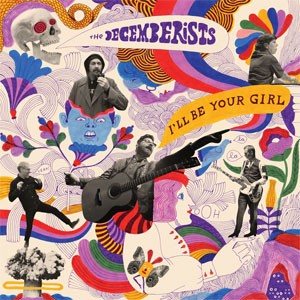 The Decemberists explore a new sound with a new producer on their inspired eighth studio album I’ll Be Your Girl, which will be released March 17 on Rough Trade Records. The acclaimed Portland, Oregon-based band worked with producer John Congleton (St. Vincent, Lana del Ray) and embraced influences such as Roxy Music and New Order to spark a new creative path, as can be heard on the synth-driven lead single “Severed”

I’ll Be Your Girl is the sound of a veteran band finding new inspiration, a unit unafraid of challenging itself to re-connect with its creativity. “Making music is an infinite choose-your-own-adventure,” says Colin Meloy, “and when you go down one path, the other paths get sealed off. So every time we could, we said, ‘If this is what our impulses would tell us to do, let’s try to imagine it in a different way.’”

Once In My Life
Cutting Stone
Severed
Starwatcher
Tripping Along
Your Ghost
Everything Is Awful
Sucker’s Prayer
We All Die Young
Rusalka, Rusalka / The Wild Rushes
I’ll Be Your Girl

The DecemberistsWhat A Terrible World, What A Beautiful World

The DecemberistsThe Hazards Of Love