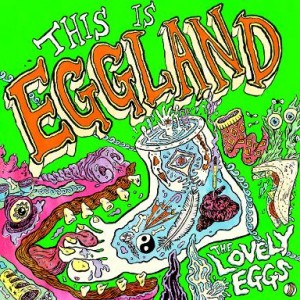 Northern psychedelic punks The Lovely Eggs return with a mind-melting new album. The Lovely Eggs are one of the most unique, innovative and genuine bands on the British Underground music scene. Heavier and more in-your-face than anything they’ve done previously, Holly Ross (guitar/vocals) and David Blackwell (drums) bring together a fierce DIY ethos, surreal sense of humour and kitchen-sink realism. Working with a producer for the very first time, Dave Fridmann (Mercury Rev, The Flaming Lips) lends his magic dust to bring out the best of The Lovely Eggs’ explosive blend of motoric krautrock, 60s psychedelia and punk rock attitude.

They create their own world and invite us to join them in Eggland. The album title is a cheeky nod to Shane Meadows’ series, This Is England. It is a comment on the current state of modern Britain. The album is about being an outsider and doing things differently, eschewing society’s conventions as they have done. Since having their son in 2013, the pair have taken him on tour with them, racing round the UK with 2 fingers up to conventional family life firmly out of the window. They have also remained in their hometown of Lancaster, despite its cultural and geographical isolation. As Holly explains; “On this album we're saying it's OK to live life differently, we're doing it and you can do it too! “Living up here in Lancaster is kind of mad. It's a bit like the Twin Peaks of Great Britain.” The town has a rich history of the witchcraft, notoriously it was where the Pendle witches were hanged”.

For the first time ever, the pair worked with a producer on the new album, welcoming in legendary Grammy award winning engineer Dave Fridmann to their world. “We received an email from Dave Fridmann. He had got our answerphone message, listened to our stuff and wanted to work with us. It was just totally bizarre!” The album was self-recorded at Lancaster Musician's Co-op and the Eggs’ own house. Dave Fridmann then produced it remotely. They then went out to Dave's Studio in New York State, for mixing. The result is a gratifyingly rich sounding record, which still retains the raw energy of the band’s sound but harnesses a real power and dynamism. It’s much heavier than anything they’ve done before. As Holly says: “It's pretty relentless. It kind of sounds like a chip shop on fire. We still write about everyday life and the stuff that goes on in our world, it's just the new album is more fierce”. The Lovely Eggs have been nudging towards a heavier sound with their previous album This Is Our Nowhere, which was praised by the NME, who called them; “One of the country's most beloved underground bands.” Having formed in Paris in 2006, they named themselves after a pigeon laid two eggs on an abandoned nest on the windowsill.

Barry says: Arguably eggs, but undeniably lovely. It's no secret that I really like the Lovely Eggs, but have found my inner appreciation of perfect production has (ridiculously) hampered my enjoyment of this impeccable duo. I can stop being ludicrous now anyway, because 'This Is Eggland' sounds amazing, and every bit as real as their entire, superb canon.